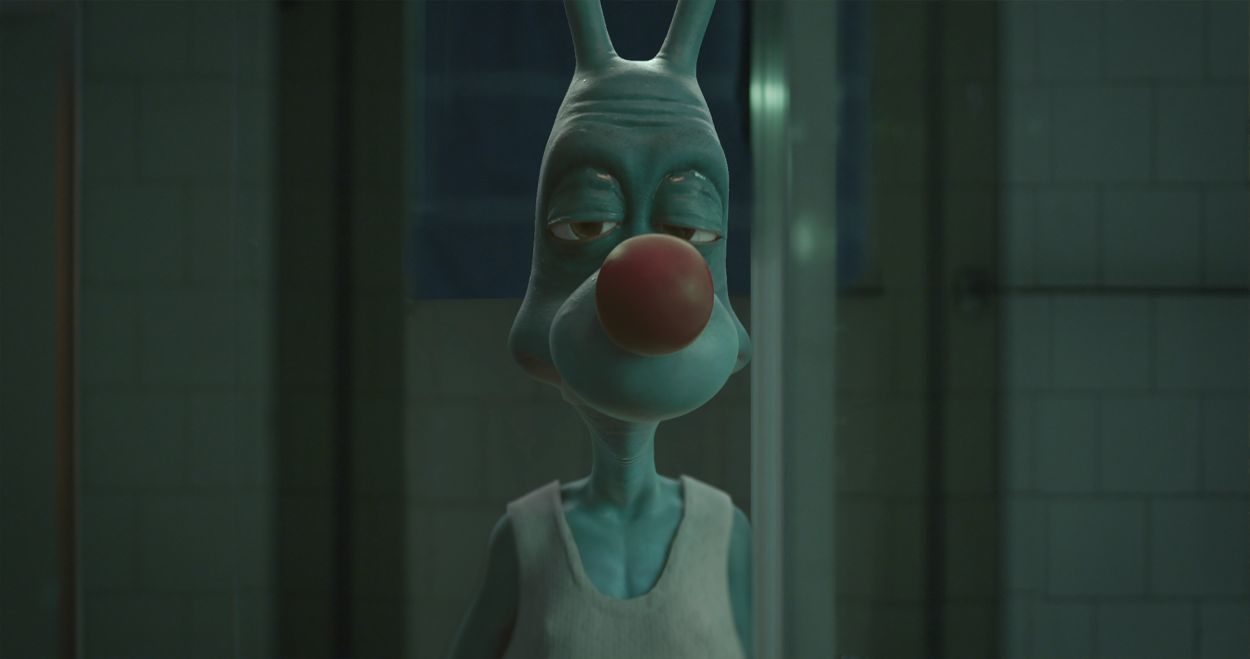 What if cartoon characters were regular people working at regular jobs and enduring the same everyday routines like the rest of us? The short film “Afterwork” took up this train of thought and ended up winning the 2017 animago AWARD for “Best Short Film”.

The project was the most ambitious of its kind in the 12-year history of Matte CG based in Quito, Ecuador. The company’s major commitment to the project originated in director Luis Uson’s obsession with Hanna-Barbera productions and Warner Bros. cartoons: “When I was a kid, I watched Looney Tunes every weekend after lunch. My favourite was Wile E. Coyote’s quest to vanquish the Road Runner, which he, of course, failed at every time. I loved Elmer Fudd and Bugs Bunny as well as Tom and Jerry, even though their style wasn’t as ‘mature’ as the Warner Bros. stuff. I had a lot of empathy for the losers who never reached their goal but never gave up trying. I would have loved to have seen them be successful at least once”, recalls Luis.

Tough Way to Make a Living

The second source of inspiration was Luis’ own employment experiences before he started working as an animation artist. It was a time when monotonous and badly paid jobs determined the course of his daily life: he was a call centre agent; he worked as a construction worker unloading delivery trucks; and he even labelled hundreds of articles in a home decoration shop. None of these jobs lasted for more than a few months, but they left such an impression on Luis that he merged the influences one day to create the project “Afterwork”.

His role model and reference for the style and look of the film were Robert Crumb’s loser cartoons and the music video “Da Funk” by Daft Punk. His inspiration for the rabbit’s character development was “The Machinist” by Brad Anderson Pate, a film in which a man (Christian Bale) suffers from guilt-induced insomnia for a full year.

Everything began in late 2014 when Luis drew an embittered blue rabbit and showed it to his colleague Andres Aguilar. From that point on, the team fine-tuned the concepts behind the model using ZBrush. It was only in March 2015 that the team started actual production on the film, which would go on to last more than 2 years. The long character development process was due to the team’s unusual approach of designing the main character before the film’s story was fully conceived; instead, they fleshed out the story parallel to the development of the character. 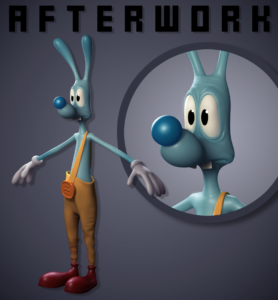 Another reason for the long production time was the fact that the team was only able to work on “Afterwork” in the few free moments they had between commercial projects. In order to manage the large workload, the artists cooperated with Uson Studio from A Coruña, Spain and Apus Estudios from Lima, Peru; the former took over much of the animation work and the latter were responsible for the 2D sequence. In the course of production, the team of artists working on the project grew continuously and ultimately comprised 24 people distributed all across the globe.

In the first phase of the project, Apus Estudios helped to create the 2D animatics, whereby roughly 40 variants came together. It was absolutely necessary to put a lot of effort into this step, seeing as the animatic was the essential basis for the film shoot. In order to keep the production costs as low as possible, the team decided to place the 3D rabbit character in real-life filmed backgrounds. They built the real-life apartment interiors in old warehouses outside A Coruña and shot statically using a RED Scarlet 4K camera so that no camera tracking was necessary in post-production. This also made it easier to integrate the CG material into the real backgrounds afterwards. All sequences were shot once with actors and once without.

Luis then used tools such as Grease Pencil to create a 2D base animation for the 3D camera, which gave the team a very good reference aid for the operational flow and animation style. The 3D animation was completed using Maya, with the lighting and the rest of the post-production taking place as usual. After the team shot for one year in real-life backdrops, the story required an extra sequence that hadn’t been in the original plan but was necessary to give the audience a better understanding of the rabbit protagonist. For these scenes, the team recreated the apartment backdrop in 3D and added 30 new shots to the film.

The particular challenge facing the team on this project was the mishmash of different techniques, especially given that all the live-action, CGI elements and 2D animation had to be produced with the same high quality necessary to give the film its all-round consistency. On the artistic side, it was complicated to design the film – which has an ambitious story that can be read on many different levels – in such a way that viewers were prompted to reflect on loneliness, the job and the relationship between reality and fiction.

One of the most important elements in creating the effect of the film was the soundtrack. For the central sequence, Manuel Riveiro (Knock Knock, Green Inferno) and Txabi Mira faced the challenge of producing a song that could replace Lou Reed’s legendary “Perfect Day”, which the team had used for the animatic. 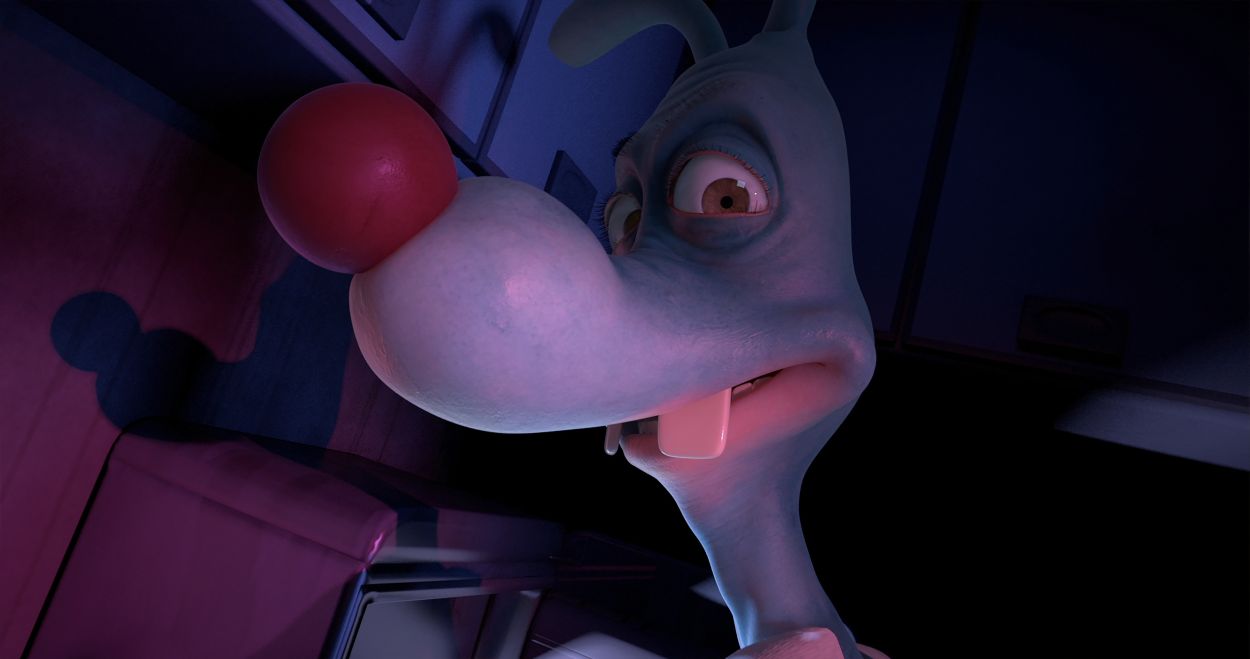 More Cartoon Characters on the Edge

Thanks to all the positive feedback their short film received, the team is now in a position to pursue a larger-scale project that was already in place from the very beginning of the project; it involves expanding the “Afterwork” universe and depicting a world in which cartoon characters live side-by-side with people and suffer from the same social problems as we do, including bad jobs, disease, poverty, addiction and a lack of love. For this reason, the team sees “Afterwork” as more than just a short film; for them, it’s the first six minutes of an ambitious feature film with the title “Aftertoons”.