Jana Freund came to Digital Production eight years ago. Prior to that, she worked as an executive assistant at the publishing company responsible for DP. Her new position was called “Event Organisation & Marketing Assistance”. At the time, she had heard of the animago AWARD with Günter Hagedorn and the DC Days, of course, but she wasn’t really aware of how big the project was. Today she ensures that the event can take place every year.

How did you experience your first animago? 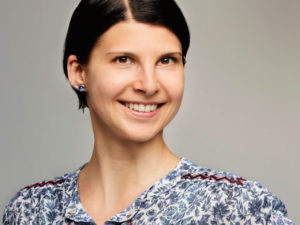 I started my job in August 2009. This meant that I had less than three months to organise the event, which at the time was succeeding the DC Days at a new location at the fx.Center Babelsberg. I had over 10 years experience in event and hotel management, so that helped tremendously in getting everything done. The only thing I had trouble with was the technical equipment, because up until then I was mostly used to small mobile screens and overhead/office projectors. During the actual event, I ended up being so preoccupied with the organisation and management of all the participants that I can’t remember one single talk or winning submission. It was only afterwards that I even had time to get better acquainted with 3D animation & VFX.

Is there one specific highlight you can remember from all your years at the animago?

Every year in the lead-up to the event, it’s great to be able to invite all the final nominees. Some of them get really excited, and it makes me even happier if they’re able to actually attend the event, especially if I know in advance that they’re going to win the trophy. In 2012, our dear jury head, Günter, thought it would be a great idea if the “woman behind the scenes” – and I was very happy to work behind the scenes up until that point – would say a big “thank-you” on behalf of the team during the award ceremony. I was shocked and moved, and I sputtered out some crazy words like “thanks to you too”. After the gala, I didn’t have a minute’s peace. All of a sudden, everyone knew who Jana Freund was. In other words, my role at the animago quickly became a very public one. And now every year I give the laudatory speech for the “Best Young Production”. I also give interviews here and there, and I’m responsible as project manager for the concept development, including all talks and negotiations with state and federal ministries, funding bodies and institutions. Of course, the funding commitment we received from the Bavarian State Ministry and the City of Munich at the end of 2015 was one of the most recent highlights. And thanks to those funds we can now celebrate the 20th anniversary of the animago AWARD at home. The move to Munich’s Gasteig Cultural Centre was preceded by an almost 10-month negotiation phase. But when I had the final signed contracts in my hands, I was quite moved and pretty proud of our little team.

Which animago submissions impressed you most and why?

On a personal level, I like submissions that are either low-fi or extremely photorealistic. For example, “My Happy End” by Milen Vitanov (2007) with its hand-painted look and only a few black lines. “Loom” by Polynoid (2010), on the other hand, is an amazing and realistically implemented short film that fits perfectly to my hobby, macro-photography, where I often very patiently observe insects. “The Revolutionary”, a still by Kristian Kelly (2011), tells its story in the vein of “a picture is worth 1,000 words”. It has so much character and lots of emotion. I’m also a fan of Uli Henrik Streckenbach’s visualisations: In “Ending Overfishing” (2012) and “Junge Helden: Ablauf einer Organspende” (2015), he explains complex subjects in a very bold and creative way, and he uses simple means to describe subjects that affect people across the globe.

What would you wish for the animago going forward?

My personal wish for the future is that I continue to have Günter Hagedorn and Thomas Gronert at my side to take care of the competition and conference respectively, and that we’re able to develop the animago even further in the future. It is a great project that allows us to showcase digital art in all of its facets, creativity and technical quality in the public sphere. Every year, we receive over 1,000 submissions from digital artists from more than 60 nations, which is just terrific and should continue to be supported.

Now you know who Jana Freund is and what she’s doing all day. If you have questions about the animago event or like to present your company as a sponsor / exhibitor there: Jana Freund is your right contact.

Share now: FacebookTwitterLinkedinPinterestXing
Previous entry:
2017 again one of the categories: Architecture Prize presented by DETAIL
Next entry:
Autodesk is sponsoring the „Best Game Cinematic“ category
Back to overview:
News