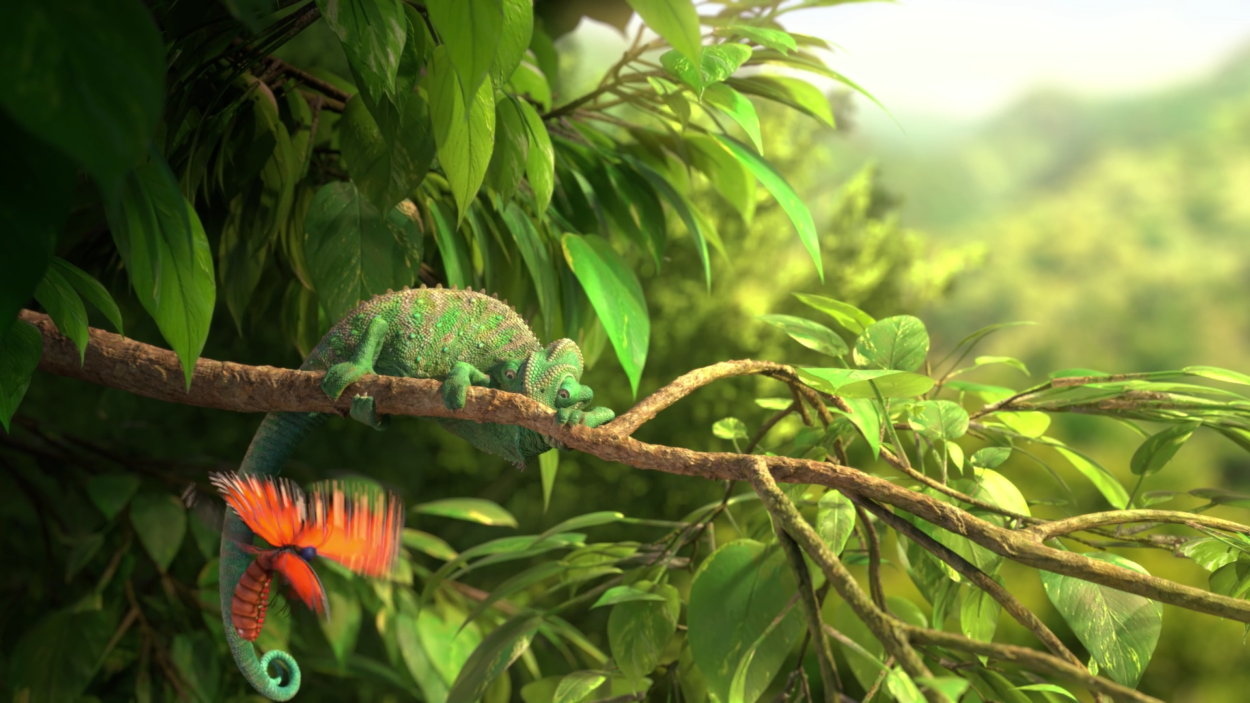 Daily routine of a chameleon

Tomer Eshed and his team, now known under a studio name Lumatic, always realize their funny movies with extraordinary animal characters in the main role on an extremely high level of quality. The director and animator now explains how these movies are created and how it is to work in Berlin.

Tomer Eshed already set the standards pretty high with his pre-diploma movie “Our Wonderful Nature” at the HFF Konrad Wolf. It contains a photorealistic nature documentation about shrews which turns into a “matrix style”, slow-motion battle scene after a break.
Tomer started the project on his own in 2006; he finished it in 2008 with the help of fellow HFF students and one professional artist. The movie with its funny, combative mice won the animago AWARD in the category “Best Young Production” in the same year. A few years later Tomer finished the movie “Flamingo Pride”. The short movie about a single hetero flamingo, who is looking for his love luck in a group of gay fellows, won the animago AWARD for “Best Short” 2011 and has also been broadcasted by cultural TV channel Arte. Tomer founded after his diploma with his team, which supported him with both of his short movie productions, the VFX and animation studio Lumatic in Berlin. It covers every part of postproduction and animation: Ideas, visualization, set and character design, 3D modeling, and animation, concept art, set extension, matte paintings, and compositing. In addition, Lumatic has experience with stereoscopic production. “Our Wonderful Nature – The Common Chameleon” was a private project of the studio. The funny short movie which achieved a lot of laughter got a nomination for “Best Character”.

DP: Ten years ago when you were in the middle of the production of the mice movie, a photorealistic full CG movie was quite the ambitious goal, especially as a beginner. But this didn´t scare you off?
Tomer Eshed: Looking back I can say: I was really naive back then. When I first started that project I just thought that I can make it somehow. During the first year I realized: Oh, this is way harder than I thought. That was the point when I started looking for help. My colleagues and I brought different sets of skills into this project which completed each other very well – We still keep this division of labor at Lumatic up to this day. You can say: Being able to finalize the mice movie is thanks to a mixture of stubbornness because I wanted to do it all on my own, and luck.

DP: CG animals usually get the main role in your movies. Do enjoy creating them the most?
Tomer Eshed: Actually it was more by accident and just happened while creating the concepts. But apart from that, I find it interesting to watch animals and eventually discover human behavior in them or the other way around: Finding animalistic features in humans. This thought is really interesting in my opinion. 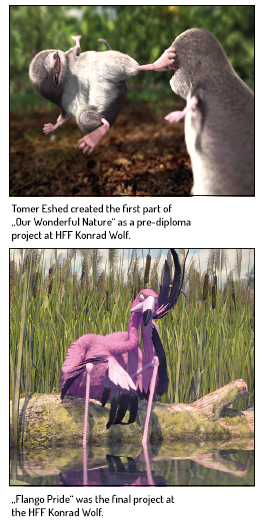 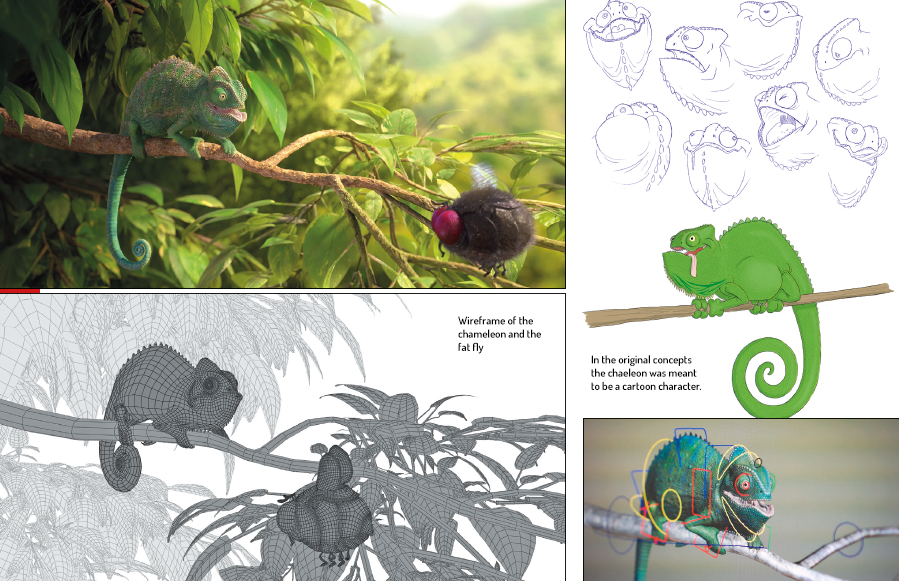 DP: How do proceed with the design of a character?
Tomer Eshed: It´s always different. For the look of the mice, I followed a photorealistic approach, but that meant that I was limited with my modeling skills. I wanted them to look realistic at first and after the break let them change into a more cartoon-like style. And even though they get quite brutal they should still look like animals and look cute. The flamingos on the other hand act more like humans, so that´s why you can find more human characteristics in their faces in the design. Basically, you can say that I always try to find the right mixture between simple and complex in my designs. Simple, so you can read them at the very first sight and complex because I want to make use of a detailed design that computer graphics allow to do. That is the strength of our technology.

DP: Which tools do you use for your movies?
Tomer Eshed: It´s always a mixture of what works best at that time. The main tool always has been Maya. We switched renderers though: Mice and flamingos were made in Renderman – that was easy because it was provided by our school and achieved the quality that was necessary for a movie. For the chameleon, we used Mantra, because Houdini was used more and more for our projects over the time. Texturing became a lot easier in Mari than back in the days with Photoshop. A lot of the digital workflow got a lot more intuitive today than it was in mid 2000. For compositing we use Nuke. Before that, it was Shake.

DP: How did you realize the chameleon film?
Tomer Eshed: Even though we are working as a service provider now we are still trying to realize our own projects as well. The movie was mainly for giggles – we wanted to do it for fun and also to show our skills in the area of character and animation. To attract attention and to generate jobs with it. Originally the movie wasn´t even planned as the second part of “Wonderful Nature” – this idea came up a little later. And if we want to continue this even further this movie provides the perfect starting point.

DP: Do you already plan a third part?
Tomer Eshed: No, not at the moment. The thought of continuing is a wide open one. But jumping from a realistic documentation into a cartoon language does provide a lot of ideas for short movies. A long film is also possible because it would very well in the family entertainment area for both kids and adults. So I´m not going to exclude this.

DP: What kind of challenges came with the chameleon movie?
Tomer Eshed: The switch of genres was the main challenge with the mice project. The realistic look of the animals, that was needed as a concept, in the beginning, had to be changed more into a human-like performance and more stylistic expressions. We developed more special deformers, blendshapes and rig characteristics to keep more of this illustrational freedom while escalating with deforming everything. For showing a realistic set and figure we used pictures and nature itself as a reference and everything that was part of our toon-exaggeration we had our original illustrations. At the end of the process, the rig made the switch between those two worlds possible and served the conceptual purpose. 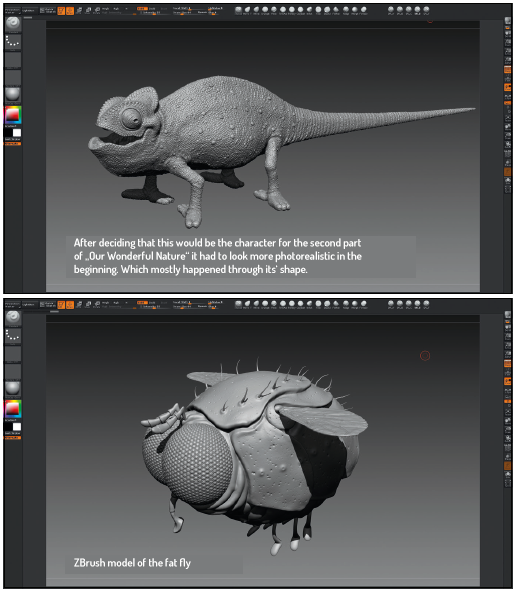 DP: How did you set up for the one-shot concept of the film?
Tomer Eshed: Everything that considered timing was a special challenge. That´s why we didn´t edit everything at once. We split the movie into four parts to get a better overview and had to put them together smoothly in the end. Because the animation itself could only be judged when seen in one piece. And so we worked our way from rough to delicate.

DP: How did the decision of actually making this movie part 2 of “Our Wonderful Nature” influence the process?
Tomer Eshed: We already set the deformation of the animal in our illustrations, but this decision did influence the workflow a lot because at first the animal was planned to be a cartoon character. After that, we had to think about a way to let the chameleon look realistic at the beginning of the movie.

DP: Which tricks did you use to solve this?
Tomer Eshed: It mainly worked by adjusting the shape: For example, the look of the mouth was crucial – the point when it begins to smile shows that it is not a real animal anymore. We solved this with blendshapes. When it came to character design we didn´t really change much, only things which were really important to see the difference between a real animal and a cartoon character.

DP: How did you create the deciduous forest?
Tomer Eshed: Since we wanted a photorealistic look and wanted to zoom in to the character with the cameras as close as possible we had to do a lot by hand when it came to modeling and texturing. After that, we used procedural animations in Houdini to solve the problem of the movement of the leaves.

DP: How long did you work on the chameleon movie in total?
Tomer Eshed: Seven months, but only because we already knew each other in this team and are able to work together very efficiently. And also the idea was a lot simpler thanks to this one camera perspective.

DP: What are you currently working on?
Tomer Eshed: We are in the middle of the concept phase of a feature animation film, which will be produced in Germany. There will be a lot of CG characters in it. If they are actually realizing it we will be working together with a few other studios as well. But have not reached this point yet. Also, we are working on an episode of “Tatort” at the moment and finished a few small character animations from other jobs as well. The ideal situation for us is to work on two or three projects at the same time.

DP: How is the network and order situation in Berlin?
Tomer Eshed: The CG scene in Berlin is not really big, so you get to know everyone in this area quite fast over the years. Berlin has its advantages and disadvantages: It is quite cheap to live in Berlin as a city compared to many other german cities in regards to rent, for example. But there is not that much happening in service providing when you compare it to Munich, Stuttgart or Hamburg. Because there you can find all those bigger studios and companies, which means all the bigger projects lie in those areas. I usually find it helpful to see Berlin as a very relaxed place during my work which is usually combined with long hours. And that is a great fundament.