Failure after failure – just to fly in the end regardless? The french inventor Hugo won´t give up until his lifetime dream has come true. The four-man team from the Fachhochschule Hagenberg is telling this story in their animated movie “Le Constructeur de Malheur”, which took a similar amount of willpower and endurance to make it happen.

“Le Constructeur de Malheur” did not get an animago nomination, but at least “3 seconds of fame” in the animago trailer 2015, as the team pointed out themselves. These four students Kristin Müller, Manuel Preuß, Philipp Gratzer and Peter Affenzeller completed their master thesis in „Digital Arts“ with this final film.
With the process of finding the right idea and the whole preproduction included the animation adventure with this project began in February 2013. Besides the main team, other people were involved as well in certain parts during the development, such as story development, background creation, sound recording and compositing. But 95% of the workload has been on the shoulders of Kristin, Manuel, Philipp and Peter. The final, completed version of the short movie was ready in May 2015. 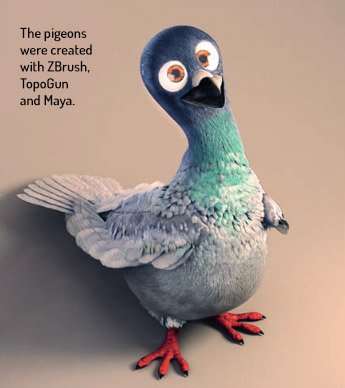 Right at the beginning of the project, the team was sure about the fact that they wanted to realize a master project together. When those four were sitting together and were looking for the right topic and story, they found the story about Franz Reichelt. He was an Austrian-french tailor and constructor of parachutes who accidentally had his 101st anniversary of death on the same day. He died during the experiment of flying down the Eiffel Tower with a self-made batman suit: “Almost everyone is fascinated by the idea of flying – but the question still came up about how big this passion must be to sacrifice your life for it. Starting with that we let the idea grow further and thought about the childhood of an aviation pioneer and how it must have been like. And voilá. The idea of “Le Constructeur de Malheur” was born!”, the students remember.

The students wanted to find their own style for “Le Constructeur de Malheur”, however, they all had visual idols like Dreamworks, Pixar & Co, so they considered these styles as well. They started with simple sketches, followed by digital ones and first 3D prototypes. At the same time, they worked on finalizing the story, the setup of different scenarios and setting up a rough time schedule.
The students had to find out the hard way that preproduction is indeed a very important phase during a project: The usual time to get a master degree takes four semesters, with three of them to work on a final project. The students did not stick to that: “We thought we a decent amount of time planned for this, but we reached way too far beyond our goal. That´s why it took us a fifth and sixth semester at the Hochschule to use its technical and logistic resources. We owe a lot to our professors and our faculty as well, because otherwise “Le Constructeur de Malheur” could not have been finished. They supported us all the time along the way. Since we – to put it in a nice way – adapted our time schedule over and over again, our teachers and fellow students gave us the nickname ´Team Malheur´.”

With the starting point of Franz Reichelt set, the students did get a whole new perspective about aviation with their research on the internet: “In our days you are just used to seat yourself in an airplane and it just flies from A to B. Flying is one of the safest ways of traveling actually. That was different in the past. There are numerous videos about flight accidents and we were surprised by those crazy and weird ideas people had at the beginning of aviation.”, the students’ comment. These Wings – Hugo´s first attempt to fly – did actually exist in a quite similar way. The success of this method was as big as the one in the movie.
There are also historical ancestors of the air bicycle which shows up at the Champs-Élysées. The hamster wheel at the Sacré-Cœur however, is mostly the result of the students´ own imagination. Just like the hot-air balloon with the lying net and the controlling mechanism at the Moulin Rouge. The exploded DaVinci-Copter is a combination of Leonardo DaVinci´s flying spiral and a steam engine. And the nightshirt Hugo uses to jump down the Eiffel Tower is based on Reichelt´s batman suit, similar to a wingsuit. But the obsession with the 3D main character needed to have its limits: “Some of these real experiments were so weird that even Hugo wasn´t insane enough to develop them.” 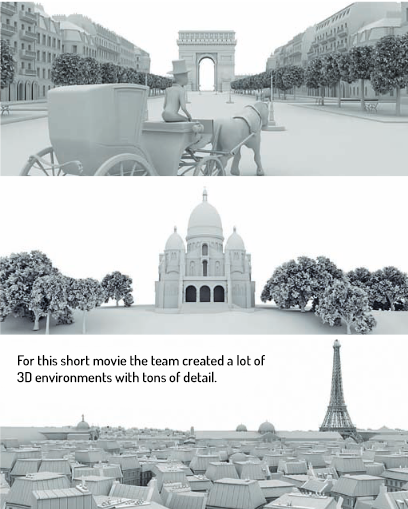 Since a lot of the FH Hagenberg courses are based on Autodesk Maya the artists used the version of 2013 of this software as their main tool. They did upgrade a few times though because certain plug-ins didn´t work. They didn´t make use of a real management tool, however, they used the server structure provided by their school. All project files added up made more than three terabytes of data. Important files were saved and secured via Dropbox and GoogleDrive, so they could still use them outside their schools’ spaces.

Hugo is a mad scientist who is always bothered by 100 ideas in his head at the same time and he usually doesn´t know which one of them he should realize first. Such an anxious creature does need its free moving space, so he needed to be thin and wiry. His scrubby haircut also reminds of Einstein`s wild hair.

Other well-known movies like Cloudy with a Chance of Meatballs” also make use of such cliques. So this lively character Hugo needed a counterpart: Calm, consistent and authoritative. Out of that, the chubby housemaid Cloé arose who always brings her boss back down to earth, but still supports him with his dream to fly.
To find the right look for those characters a lot of 3D sketches in ZBrush 4R4 were created since the characters were still at the beginning of the creation it was the easiest way to model intuitively and to make adjustments. Same goes for all the high poly models of Hugo, Cloé and the pigeons which were created in ZBrush as well. After that TopoGun was used to create a low poly model for animating. All rigs have been created by hand without any auto-rigging tools. “It did take us a while because we didn´t have enough experience. We were sure that we needed to put together different parts of tutorials to get a rig which provides enough freedom with a huge range of motion for our animators. We needed to start over a couple of times and numerous versions, but after a few prototype animations the Rig was ready to go for production.” A lot of those provided functions were not needed in the end, so the students could have saved some time with that. Rigging the flying engines was easier though: Some Custom Nodes were used, for example, to get sinus-like movement for the wings of the hamster wheel. For more subtle deformations they used noise deformer.

The devil lies in details. The team chose Paris as setting for their story so they had to find the right location for each flying engine where Hugo could try them out. Champs-Élysées came to mind as the runway for the air bicycle. And which place seems more fitting to tangle up with an hot-air balloon than the mill-wheel of the Moulin Rouge?!
“We followed the naïve idea of keeping up with the level of detail of big studios, so we tried to build everything as accurate as possible. This was complete overkill and it influenced the whole time schedule and the rendering process. The Sacré-Cœur is a good example for that. It has an insane amount of detail in it, but you can only see it for three seconds in the movie during an establishing shot. A matte painting for the environment would have worked as well.”, the team sums up. All environments were created in Maya and 3ds Max. All texturing happened in Mari and the compositing in After Effects and Nuke. 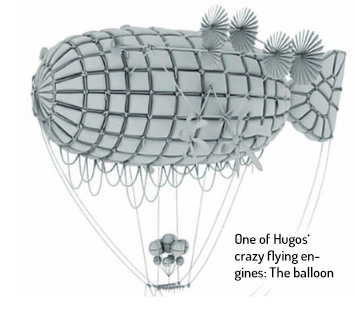 The students wanted a certain amount of variability for their postproduction, so they chose V-Ray with up to 15 different render layers. Usual cases like ZDepth, ambient occlusion, reflection, shadow and diffuse were accompanied by various material-assigned layers.
The students remember: “We calculated the time to render everything completely wrong. Although we wanted full HD and worked with numerous HD texture maps we were thinking of approximately 10 minutes per frame. We based that conclusion on previous render tests. We learned the hard way how much this can vary and we found ourselves with our backs at the wall. Complex scenes suddenly took over two hours per frame. And we are talking about 12.000 frames for the whole movie.
We tried to save some time with our test renderings with rudimental light setups, tiny resolutions and compressed textures.” All of this happened with four high power computers in the studio known as “Outpost” of the FH. For two years the team spent almost its entire time at this place. When a scene was ready to render the students used around fifty additional workstations which didn´t have that much power – at least in the class free times. 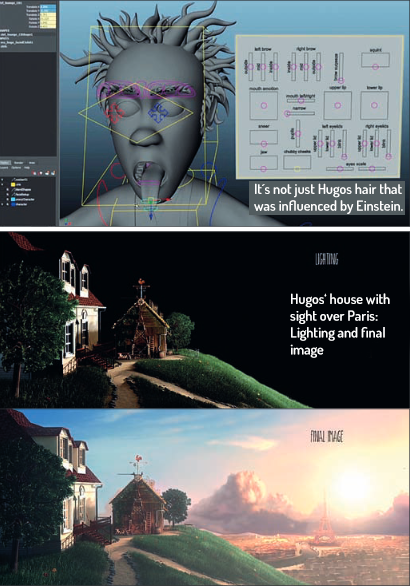 It was quite the exhausting journey to realize a full CGI project with two human characters and numerous 3D environments über such a long time with only 4 people. The team tells about this time: “ The biggest challenge certainly was to not lose hope. For this Hugo was a great example though. ´Le Constructeur de Mahleur´ was our first bigger project, so we sure asked ourselves if we didn´t want too much. Luckily we didn´t have to jump down the Eiffel Tower at the end. The problem was that we had an exact vision of how ´Le Constructeur de Malheur´ has to look when it´s done. Since this was by far our biggest project we were too ambitious while planning everything. We did not expect to face such big challenges which cost us weeks.
Especially in the end where we had to scratch quite a few things and that really broke our hearts. But what is important is that we managed to pull through in the end. Sometimes a strong will can even move Eiffel Towers. And again, this movie would have never been realized if both our FH and teachers didn´t support us that much along the way with two blind eyes.”

Share now: FacebookTwitterLinkedinPinterestXing
Previous entry:
Isolation and a cat – highclass lighting
Next entry:
Daily routine of a chameleon
Back to overview:
News