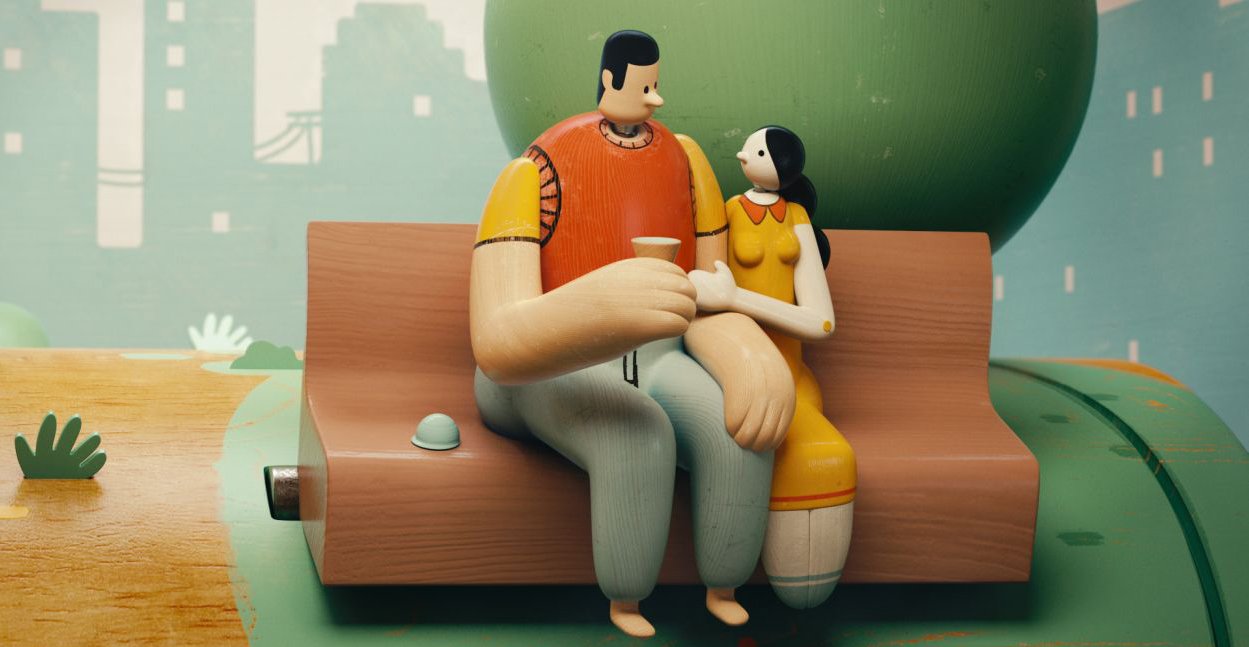 Jane Bordeaux is a Tel Aviv-based acoustic folk-country trio that sings in Hebrew. For the band’s song “Ma’agalim”, animation directors Uri Lotan and Yoav Shtibelman created a charming music video that they lovingly animated in 3D to perfectly fit the lyrics of the song.

If you’re like the editors of DP and can’t speak Hebrew, here’s an excerpt from the song “Ma’agalim” in English: “Nights turn into days, days turn into years – and among them I was going faster in circles. It’s not me who’s moving forward; it’s time that’s moving further away”. In order to visualise the song’s quintessential meaning in their animated video, Lotan und Shtibelman developed the idea of a wooden marionette stuck on a roller in an antique vending machine; the figurine goes around and around as the world passes her by in an endless loop.

The whole collaboration started when Lotan and Shtibelman contacted Jane Bordeaux to suggest they design a video for the band; up to that point, there hadn’t been any kind of briefing, nor did they have any concrete ideas. The members of the band had been thinking of producing a music video for “Ma’agalim” for some time, so they sent the song to Lotan and Shtibelman, who immediately liked the song’s rhythmic melody, its theme and the fact that it was sung in Hebrew.

A museum visit in San Francisco

A visit to the Musée Mécanique in San Francisco inspired Lotan and Shtibelman to come up with the idea of a penny arcade environment. The museum is home to several antique vending machines, and as the duo walked through the museum, it was as if time stood still, seeing as the figures on the reels are doomed to perform the same actions over and over again. In other words, they provided the perfect metaphor for the video to “Ma’agalim”.

The idea of creating 3:30 minutes of full-CG animation with a 13-person team within 5 months is pretty ambitious. In order to achieve their goal, many of the work phases had to run parallel to one another, including the modelling, set design, animation, lighting and compositing. This way, the team didn’t have to stop for technical details; it also made the creation process more organic and less formal. Their biggest priority was always the big picture; subtleties in individual shots were worked out only after the basic blocking of a sequence had been determined. They stuck to this principle in the modelling as well. The team first created basic 3D models of all actors so as to test whether they harmonised with one another. After that, they worked on the further elaboration of the 3D-character details. They applied this approach across the board and it ultimately helped to create the consistent look of the film.

How does one create the illusion of life in lifeless wooden figures? The team solved this creative challenge by means of editing, composition, lighting and sequencing tricks, as well as via many other cinematic techniques.

The biggest technical challenge came in the opening shot, where the audience is introduced to the complete cast and the world around them via a zoom shot into the machine. This “beast of a shot” had a running time of 47 seconds and 978 shots. The team’s approach to this “technical nightmare” had to be very organised: they first mapped out the world as a flat surface, then positioned each character and determined their movements on the surface of this schematic top view. After that, they created the storyboard and a simple 3D layout version for the complete shot. The next step consisted of designing the world around each 3D model that would fit the story of each respective character. A very important step in achieving the film’s unique look was the painting of the texture map onto the cylinder. After that, Yosef Refaeli packed up all the models, textures and shaders and carefully did the lighting for the huge shot until the final look had been achieved.

Because the text was in Hebrew, Lotan and Shtibelman aimed their music video primarily at the national market. The team posted the finished clip on their private Facebook pages and – to their great surprise – watched it go viral within a couple of hours. As of today, the video has been seen at least 1.7 million times on Vimeo. The team is very happy that so many people enjoy their video despite the fact that the song is in a foreign language. Both animation directors describe their work on “Ma’agalim” as the most fun they’ve had in their careers up until now, and they’re both eager to work on more unique projects in the future. We’re looking forward to it!

The two other nominees for the “Jury’s Prize” were: